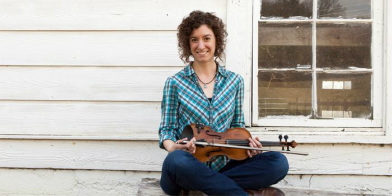 Rayna grew up in a musical family, and has spent most of her life immersed in the sounds of rural string band music, heartfelt gospel songs, and old ballads.
After honing her fiddle skills playing at jam sessions and square dances, Rayna fell into a life of traveling and performing. Her fiddle albums are widely celebrated in the old-time music community, and she has recorded with a host of musicians in a variety of styles – including Robyn Hitchcock, Tyler Ramsey, Sara Watkins, Loudon Wainwright III, John Paul Jones, and Abigail Washburn.

From 2003 through 2008, Rayna was a member of the acclaimed string band Uncle Earl, with whom she released two albums on Rounder Records and toured extensively. In 2010, she met songwriter Scott Miller, and they began performing and recording together. In 2012, Rayna released her first vocal album, Old Light: Songs from my Childhood & Other Gone Worlds, on StorySound Records. She lives in Swannanoa, North Carolina.

You may purchase Rayna's music via the cover image(s) below, or via outlets including CD Baby or County Sales.  Her current discography includes:

Plus many more collaborations and projects available via her website http://www.raynagellert.com/albums/